DVIA - M vs Piezoelectric Vibration Isolation Systems. Which is King? 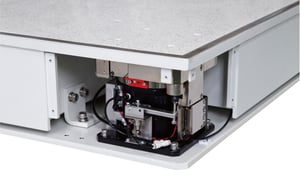 The primary components of the system are:

isolated mass vibration and utilizes electromagnetic actuators to create an equal and opposite force to attenuate vibration on the isolated mass.  Although the system works well out of the box, tuning the feedback control loops allows VEC and Daeil to optimize system performance by adjusting the gains based on the isolated mass and using advanced notch filters for accounting for any onboard resonances or vibration sources.

and generate a signal to the actuator to cancel detected vibration

The feedforward control for the DVIA-M series is also dynamic.  It uses real-time ground sensor measurements to detect vibration and sends a signal to the actuators to cancel the vibration before it reaches the isolated mass.  With dynamic control, the feedforward control easily adapts to the changing vibration level in your facility and does not require constant re-tuning to deliver outstanding performance. 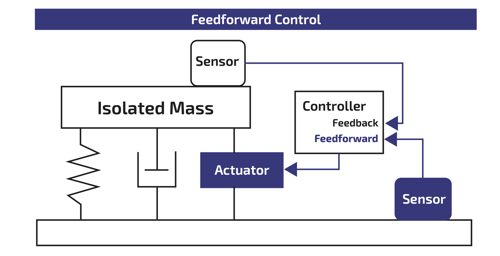 Feedforward controls cancel vibration before it reaches the isolated mass

Misconceptions about Feedback and Feedforward Controls:

Literature published by competitors perpetrates several misconceptions about feedback and feedforward controls that may be true for other vibration isolation systems but are simply wrong for the DVIA-M series.

Misconception #2: Feedback sensing of the isolated mass results in all payload resonances fed into the control loop.

Misconception #3: Feedforward input is a preprogrammed input signal and has no impact on reducing low-frequency floor vibration.

Typical performance of the DVIA-MB 1000 with only Feedback control

The stiffness of piezo-based systems works well for moving equipment, but it has limitations for electron microscopes and imaging applications.

The first limitation is that the passive component of the piezo-based system is typically an elastomer, which is very stiff and has a high resonant frequency ~20 Hz.  Therefore, the piezo-based system must use active control gains to minimize the higher frequency vibrations and a very stiff overall system.  The result is a degradation in performance at frequencies beyond ~50 Hz.

The second limitation is that the piezo-based system uses only a feedback control loop and does not benefit from a feedforward control element, so low-frequency performance is also limited compared to the DVIA-M series. 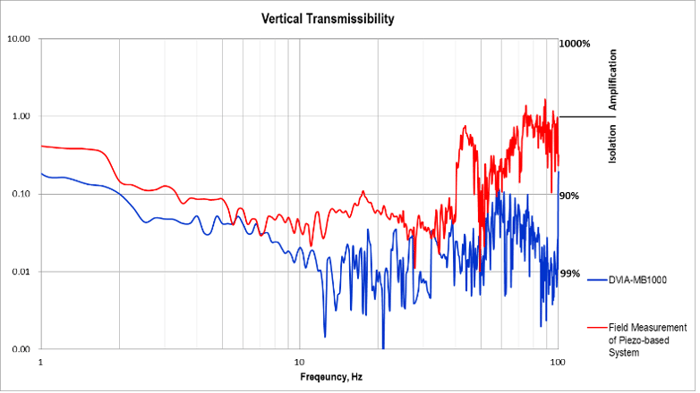 also has similar benefits in the horizontal directions.

In summary, the design and controls of the DVIA-M series vibration isolation system result in superior performance compared to other options on the market. 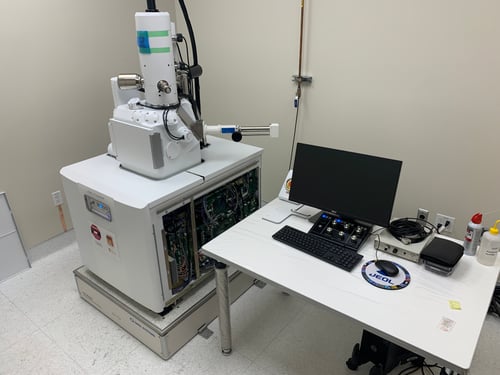